The #NationalMuseumPH joins in the celebration of the 5th Maritime and Archipelagic Nation Awareness Month (MANA Mo) with the theme, “Our Seas, Our Livelihood, Our Heritage: Connecting Lives and Nations”. This annual affair is celebrated every September to raise awareness on our country’s maritime heritage that defined Filipino culture. Among the many activities are Fish Conservation Week, International Coastal Clean-up Day and National Maritime Day. This week’s #MaritimeMonday features the bronze cannon from the Pandanan shipwreck. In 1993, a shipwreck was accidentally found by a pearl diver while looking for a missing basket of pearls near Pandanan Island, southern Palawan. Two years later, the site was archaeologically excavated and yielded remains of a wooden ship that contained over 4,000 artifacts from different countries. A Chinese coin dated to the reign of Chinese emperor Yongle (1402–1424) of the Ming Dynasty (1368–1644) provided the basis of the relative dating of the site but the overall analysis of the archaeological assemblage points to the middle to late 15th century as the sinking date. Among the significant finds are the two small bronze cannons of unknown origin. The cannon photographed in this post measures about 27 cm long and was highly eroded that many features are difficult to recognize. The absence of cylindrical projection for mounting or pivoting point called trunnions suggests the manner in which the cannon was handled. The socketed cascabel feature indicate that the cannon may be stock mounted. The oversized hemispherical muzzle is indicative of a blunder-buss function, designed to obstruct a personnel not behind armor. When the cannon is fired, the muzzle widening serves to contain its flare. Metallurgical analyses have yet to be done on the cannon to provide more details on its origin, type, and function. In the Philippines, a common term for a small culverin or brass cannon normally with a forked swivel mount is “lantaka”. This is known among Maranaos, Maguindanaos, Tausugs, Cebuanos, Warays, and Tagalogs. The word lantaka and the rich metal-working expressions demonstrate an early metallurgical tradition in the country prior to colonization. Shipwreck exhibitions at the National Museum of Anthropology (NMA) are temporarily closed for public viewing due to heightened health restrictions. Please monitor our Facebook page for further announcements. In the meantime, you may view selected NMA galleries through a 360° virtual tour here: http://pamana.ph/ncr/manila/NMA360.html. #MANAMo2021 #MuseumFromHome #StaySafe #BeatCOVID19 Text and poster by NMP Maritime and Underwater Cultural Heritage Division. © National Museum of the Philippines (2021) 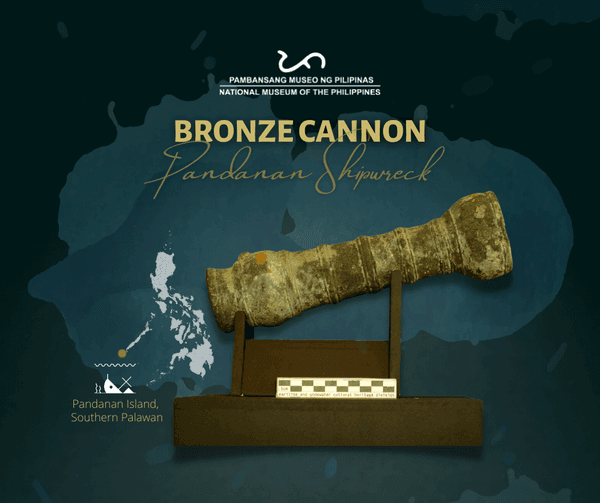