National Museum of the Philippines /
Posted 5 days ago

Today’s #BuiltTraditionThursday in our #MuseumFromHome series, we feature a bahay na bato in Quiapo, Manila that is still intact to this date, the Bahay Nakpil-Bautista. It is situated at 432 Ariston Bautista Street (formerly Calle Barbosa) and was built by Dr. Ariston Bautista Lin and his wife, Petrona Nakpil in 1914. Known as “Tahanan ng mga Katipunero”, the Filipino Propagandistas and Katipuneros who struggled to fight for freedom resided in this house. Bahay Nakpil-Bautista was built by Ariston Limpingco Bautista, a doctor, a philanthropist, an active member of the Propaganda movement, and a member of the Malolos Congress in 1898. The house was also the family life of the Lakambini ng Katipunan and widow of Andres Bonifacio, Gregoria de Jesus also known by the name, “Oryang”. Designed by a notable architect, Arcadio Arellano, the Bahay Nakpil-Bautista is a bahay na bato in floral style. According to Zialcita, Tinio & Oshima, a Floral style is a type of bahay na bato wherein the volada or the upper floor projection is turned into an open gallery and serves as an extension of a room thus making it more spacious. Its volada is located at the north side and serves as an extension of the cuarto. The ground level is made of masonry walls and the upper level is of wood. The plan is a quadrilateral with one oblique side facing southward. The building footprint is about 396.70 square meters. Moreover, Bahay Nakpil-Bautista is decorated in the Viennese Secession style, whose establishment was influenced by Art Noveau popularized in the 1900-1920. Arellano took inspiration from the German Art Noveau style of Dr. Bautista’s furniture such as chairs, living room tables, mirrors, and vitrines in designing the articulation for the house. Slim decorations come with pairs or trio of long fluted bars are depicted in the ventana grilles, ventanilla grille work in a styled lyre-pattern, callado with tulip-shaped tracery, espejos or glass-paned transoms, balustrade of the staircase, and iron gate of the house. Complementing the style of the Bahay Nakpil-Bautista are window bays made of Philippine hardwood panels with capis shell panes. Bay windows have persianas or sliding louvered panels that are used during the hot season for ventilation. The sliding louvered panels are seen on almost all window bays in the house excluding the cocina and the entresuelo. Additional means of lighting and ventilation are provided by ventanillas with iron Venice Secession-style grillework, as recurring motif of the house. Above the windows are transoms with the same 3-linear pattern and with glass panes. Eleven windows made of capis shell are extant at the second level of the house. Some panels are missing and some capis are broken or missing. Approximately 5,152 capis shells were used for the windows of the house at the second level. Five hundred and sixty are identified first grade-capis shells, which measures roughly 7.5 to 8 centimeters. Facing the estero on the east side of the house is a large comedor. Each window panel measures 0.61 meters in width and 1.865 meters in height. The capis shells found are the largest in size measuring 7.5 centimeters in width and 7.5 centimeters in height, thus identified as first grade flat. There are about 490 extant first grade capis shells used for the windows at the comedor. Exhibited in the “Placuna placenta: Capis Shells and Windows to Indigenous Artistry” are Manila’s Built Heritage structures that feature capis shell windows. The Bahay Nakpil-Bautista is the only exhibited structure with the largest extant capis shell used for its window. Catch a sight of the ancestral house on your visit to the National Museum of Fine Arts, at the Gallery 20. In the meantime, here’s a glimpse of the exhibition: https://www.youtube.com/watch?v=BTpyLDCaero Text and illustrations by Ar. Bernadette B. Balaguer and photos by Erick E. Estonanto and Ar. Armando Arciaga III | NMP AABHD #NationalMuseumPH #CapisShells #BahayNakpilBautista © National Museum of the Philippines (2021) 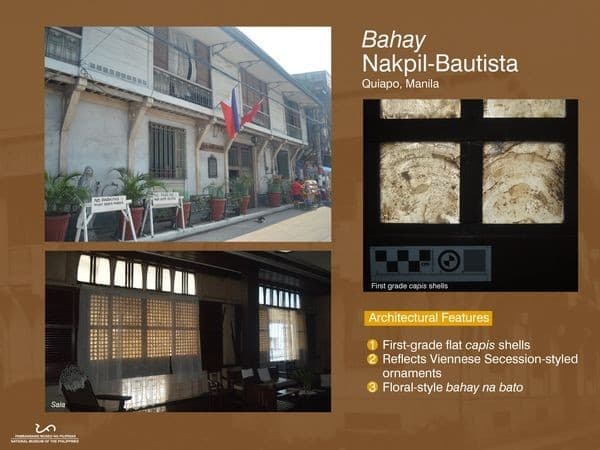