National Museum of the Philippines /
Posted 6 days ago

As we continue to celebrate the #NutritionMonth, this week’s #TrowelTuesday by the #NationalMuseumPH features the archaeological evidence of chicken in the Philippines. From the crispy fried chicken to the soulful tinola dish, chicken meat is one of our key sources of protein. But since how long ago have we been feasting on a drumstick? Chicken is considered as one of the three main domestic animals introduced into Island Southeast Asia, along with the dog and domestic pig. The exact origin of domesticated chicken in the Philippines is still subject for further studies, although a possible local domestication within the archipelago is being suggested. Genetic studies reveal, however, that our chickens were introduced into the Pacific as early as 1100 Before Common Era (BCE), through comparatives of the modern chickens in the Philippines and archaeological specimens from Vanuatu. Meanwhile, chicken remains from earlier archaeological sites in the Philippines remains elusive. Its earliest possible evidence is a tibiotarsus (leg bone) fragment recovered from Savidug Site in Batanes, dated around 500 to 300 BCE and found in association with butchered remains of pigs and dogs. Most of the evidence of chickens began appearing in 10th-to-15th-century archaeological sites in Butuan, Tanjay in Negros, Cebu, and Manila, with the remains indicating consumption. In a 12th-to-14th-century site in Santa Ana, Manila, a partially complete skeleton consisting of the wing, the sternum (breast bone), and a pair of legs, was recovered. While some chicken remains from Santa Ana sites show traces of food preparation, these specimens lacked such findings. This might have served as a ritual offering, a practice still observed among the indigenous groups in the Philippines. Whether through typical meals or rituals, chickens have been a part of our food culture, nourishing our communities for millennia. Your #NationalMuseumPH is now open to the public. To book your visit, register at https://tinyurl.com/NMPOnlineReservationForm, and #KeepSafe by practicing minimum health protocols while viewing our galleries. Alternatively, you may also experience our 360 virtual tours by clicking on this link: http://pamana.ph/ncr/manila/NMA360.html. #NutritionMonth #Chickens #MuseumFromHome Text and posters by Timothy James Vitales | NMP Archaeology Division © National Museum of the Philippines (2021) 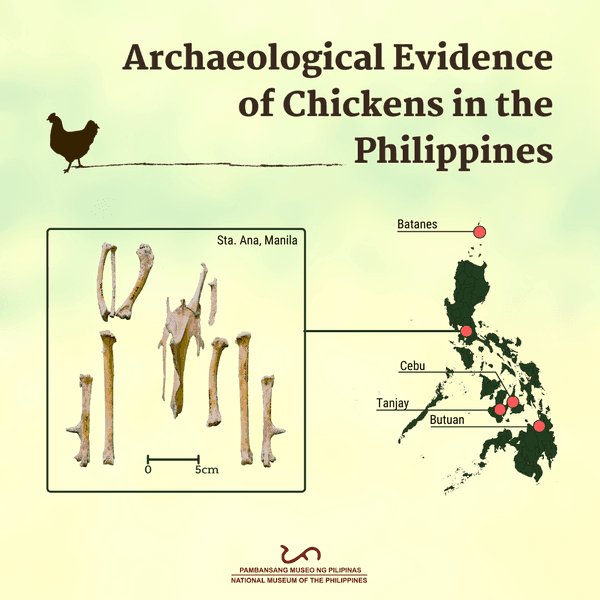