National Museum of the Philippines /
Posted 8 months ago

The #NationalMuseumPH contributes to the National Tamaraw Month last October with a documentary film screening of “Suwag o Suko: Saving the Tamaraws from Extinction”. The film was launched at the National Museum of Natural History in partnership with the Biodiversity Finance Initiative (BIOFIN), a project of the Department of Environment and Natural Resources (DENR), the United Nations Development Programme (UNDP), Mindoro Biodiversity Conservation Foundation Inc. (MBCFI), Ec o Explorations, Canon and Benro. Under Proclamation No. 273, all government offices, agencies and instrumentalities in the whole Island of Mindoro are urged to implement activities geared toward the conservation of the tamaraw and its habitats at least during the month of October. The launching of the documentary film is part of the events of LIPI: Likas Yaman ng Pilipinas lecture and Documentary Series in October which aims to raise awareness about Bubalus mindorensis (Tamaraw) and to support the Tamaraw Conservation Program (TCP) through its projects. This exclusive film highlights the plight of the tamaraw and the tamaraw rangers in protecting and saving the lingering population of the largest endemic Philippine land mammal from extinction. The event was joined by local officials who are involve in wildlife protection and conservation programs. It was attended by Hon. Josephine Sato (Occidental Mindoro District Representative), Ms. Grace C. Diamante (Executive Director of MBCFI), Ms. Ann Adeline Dumalinang (Project Officer and Trustee of Masungi Georeserve), and Mr. Emerito “Tonki” Ramos III (President of the Tamaraw Rural Bank). Ms. Antonette Taus of the UN Environment Programme Goodwill Ambassador as well as Atty. Theresa M. Tenazas, OIC and Chief of the Wildlife Resources Division of the Biodiversity Management Bureau, Department of Environment and Natural Resources were also present in the event. The event concluded in curatorial tours to two of our natural history galleries where the Tamaraw is currently exhibited, the Biodiversity Gallery (Gallery I) and the Lowland Dipterocarp Gallery (Gallery VI). Photos and text by NM BNHD ©The National Museum ot the Philippines (2019) 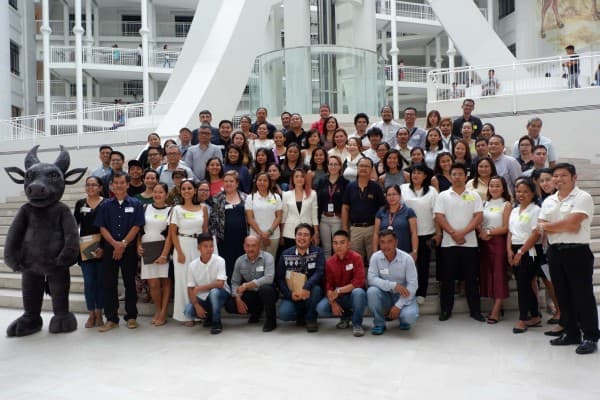 National Museum of the Philippines