National Museum of the Philippines /
Posted 3 days ago

As we enter the month of June, we remember our time in school but probably never wondered how these common four-walled structures may have been where our elders have also started their formal education. In our #BuiltTraditionThursday of our #MuseumFromHome series, we feature one of the early schoolhouses in our country. An adequate, secularized and free public school system was established during the first decade of US American colonization during which schoolhouses were prioritized. It was an essential structure for each community since education was the major focus of their governance by virtue of Philippine Commission Act No. 74 of 1901. These schoolhouses were designed with local factors in mind, such as the country’s tropical climate, the constant earthquake, and the building materials which were easily sourced from different areas. A standard school building type emerged from these considerations. The buildings have symmetrical layout either in linear, U-shape, H-shape or quadrangular with a central courtyard. Each classroom had the typical size of 7 by 9 meters which were provided with partitions that could open up and join classrooms. Moreover, long planks of native hardwood were used for the floor, making them resistant to wear and tear. For classroom windows, capis shells were designed fitted in wood grid holders to control excessive sun light and allow circulation. The windows were either sash-type, horizontal pivoted or hinged at midsection. They were two meters high and one meter wide with a one-meter high transom. Awnings were installed over tall windows to keep shaded its interiors. While their ceilings were four meters high and made of sawali (thin sheets of woven bamboo), tongue and groove, or coffered plywood, their roofing materials were made of galvanized iron sheets, that may be plain or corrugated, or of flat cement tiles. Eventually this type of schoolhouses later called Gabaldon after the author of the Public Act No. 1801, Congressman Isauro Gabaldon of Nueva Ecija. Founded in 1917, Dr. Celedonio A. Salvador Elementary School in Paco, Manila, formerly named Jefferson Primary School is an existing example of a Gabaldon school building. It has a standardized design prepared by William Parsons, who was an American Architect appointed as Consulting Architect for the colonial government. As a training department for the Philippine Normal School, it was partially damaged during World War II and was restored under the Rehabilitation Act of 1946 by the US Congress. The school’s name was changed to its present name after the first Filipino Educator who served as Director of the Bureau of Public Schools in 1937. The main building’s floor to ceiling height is approximately 6.40 meters while classroom and hallway ceiling height are about 3.60 meters. An important feature that has every indication of designing schoolhouses for the tropics is the central courtyard, which has an area of around 486 square meters. These are and accessible from the east and west hallways using the wide concrete stairs. Although still intact, the original hardwood floors inside the rooms bear signs of deterioration while the hallway floor finish has been converted with tiles. The Gabaldon School Buildings Conservation Act (or RA 11194 of January 18, 2019) emphasizes the protection and conservation of Gabaldon school buildings as part of the Philippines’ built heritage. The Dr. Celedonio A. Salvador Elementary School is a fine example of our built heritage that deserves preservation. Dr. Celedonio A. Salvador Elementary School is one of the featured Built Heritage Structures in the Placuna placenta: Capis Shells and Windows to Indigenous Artistry exhibit of the National Museum as it demonstrates the clever use of capis shells on Gabaldon school buildings. Once the museum doors open to the public again, we invite you to visit the exhibition and appreciate the built heritage that displays the rich culture and long history of our country. In the meantime, you may view a video on which you can get a glimpse of it by clicking this link: https://www.youtube.com/watch?v=BTpyLDCaero #GabaldonSchoolBuildings #TropicalArchitecture #CapisShells #PlacunaPlacenta #BeatCOVID19 #StaySafe Text and Illustrations by Ar. Kamille Patrizia C. Sepidoza-Daysa Photos by Erick Estonanto © National Museum of the Philippines (2021) 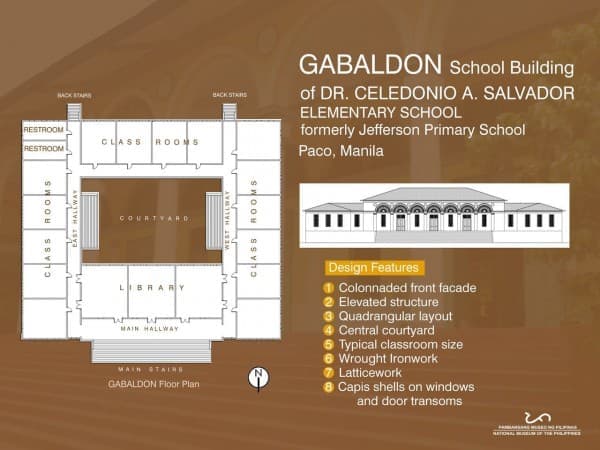