In the continuing celebration of Maritime and Archipelagic Nation Awareness Month, this week’s #TrowelTuesday by the #NationalMuseumPH features the Spanish colonial shipyards of Sorsogon. The Manila-Acapulco galleons succeeded in connecting the West and East by sailing through the vast ocean divide, incorporating the Philippines through the cultural changes brought by the influx of products, people, and ideas onboard the galleons. From 1565 to 1815, the galleons served the colonial government’s official functions and its business interests and private individuals’, and the proselytizing mission of the Catholic church. During the height of the galleon trade, local shipyards or astilleros were established for several reasons. One view is that the domestic construction of galleons were cost-cutting measures as maintaining the colony became a burden for Spain. Another view explained as a matter of efficiency with the higher demand for the circulation of goods made it expedient for the imperial restrictions to give way to mercantile interests. The necessity of building galleons in the Philippines was an outcome of the expanded and enhanced trade, making shipyards part of the fabric of social life. Besides Cebu and Cavite, Bagatao Island in Sorsogon was also noted as an astillero by economic historian William Schurz. He enumerated major considerations in establishing a shipyard: availability of raw materials, a port, and ready manpower. Sorsogon in the Bicol Peninsula, which became the site of at least 3 astilleros, boasts of an extensive forest, major river systems, coves, and bays, and the best passage for the galleons—the “Embocadero” or San Bernardino Strait. Most importantly, it had a population skilled in boat-building, seamanship, smelting, and smithing. Through archaeological surveys and excavations conducted in the 1990s, the astilleros of Donsol, and Binanuahan and Panlatuan in Pilar were identified and documented. These astilleros—located on a bay or a peninsula—are close to major and opposing river systems, creating deep waters. Documented at the Donsol astillero were the smelting furnace’s base, clay oven, oily soil, as well as a 3-meter anchor that is now displayed at the Sorsogon Provincial Museum. The Binanuahan astillero, on the other hand, was the most exposed to environmental degradation, yielding only the remains of the palm palisade, large mooring posts, and the section of a collapsed building. In contrast, the Panlatuan astillero had the best-preserved features: its large mooring posts and the pier were still visible, and ruins of a watchtower and the smelting area with evidence of slag were also found. Chinese and European sherds were recovered in all astilleros, but only Donsol and Panlatuan sites yielded artifacts associated with shipbuilding and repair, metal smelting and smithing, and slag. The #NationalMuseumPH galleries remain closed to the public due to Metro Manila’s Modified Enhanced Community Quarantine (MECQ) status. Click here to experience a 360° virtual tour of select galleries of the National Museum of Anthropology: http://pamana.ph/ncr/manila/NMA360.html. #Astilleros #SorsogonSpanishShipyards #MANAMo #MuseumFromHome #StaySafeStayHome #BeatCOVID19 #WearAMask Text by Mary Jane Louise Bolunia and posters by Timothy James Vitales | NMP Archaeology Division © National Museum of the Philippines (2021) 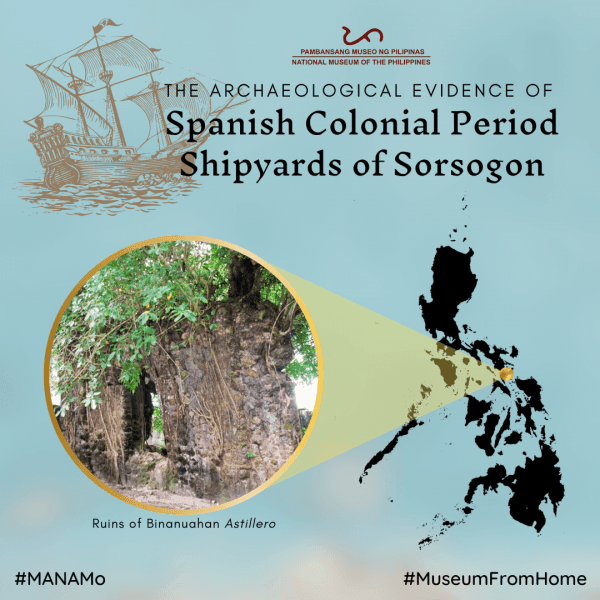