National Museum of the Philippines /
Posted 7 days ago

This week‘s #MaritimeMonday features the Spanish olive jars found in the San Diego shipwreck. After a naval battle with the Dutch ship Mauritius, the vessel sank on 14 December 1600 near Fortune Island in Batangas. Previously we told the story of San Diego and featured many of its archaeological objects. More than 34,000 archaeological objects have been recovered from the shipwreck, including at least 16 Spanish olive jars. These are earthenware characterized by coarse, unglazed fabric in oval, amphora-like shapes with thick, narrow rims and rounded bottoms. The term “olive jar” derives from its early purpose as containers for olives and olive oil, but has then evolved to contain many other substances such as water, wine, food items, and even construction materials. Seville and Cadiz in Spain produced the jars from the 16th to the 18th centuries Common Era or CE. These were considered a continuation of the Mediterranean amphora tradition that began in the early centuries CE. Galleons from Spain to Acapulco, Mexico via the Atlantic Ocean may have carried the San Diego olive jars. From Acapulco, the jars were transported across the Pacific Ocean to the Philippines in a Manila galleon, not the San Diego, as the vessel reportedly only plied the inter-island route. Its presence in the vessel may be attributed to the Spanish merchants and passengers, who were on board when it sank. These jars represent the only examples found in Philippine archaeological context, and are thus significant material evidence of the maritime connection between the Philippines and Spain. Archaeological study is very important in supporting the accurate interpretation of past events, which helps in reconstructing our history. When a site is disturbed or pilfered, we lose information forever without the significant context to assist us in piecing together our story. This is much more valuable than the selfish individual’s monetary gain or enriching their collections. Our heritage and recounting its narrative through material culture benefits future generations and our aspirations as a nation. If you see or have knowledge of sites being looted, report to your local government authorities immediately or contact the closest NMP office near you. Your #NationalMuseumPH is temporarily closed again to the public. In the meantime, know more about our collections through our galleries and this series, and expect an upgraded exhibition on three centuries of maritime trade soon. #MuseumFromHome #StaySafeStayHome #BeatCOVID19 Poster, text, and photos by the Maritime and Underwater Cultural Heritage Division Some photos © Frederic Osada, Gilbert Fournier, Franck Goddio/World Wide First (WWF) © National Museum of the Philippines (2021) 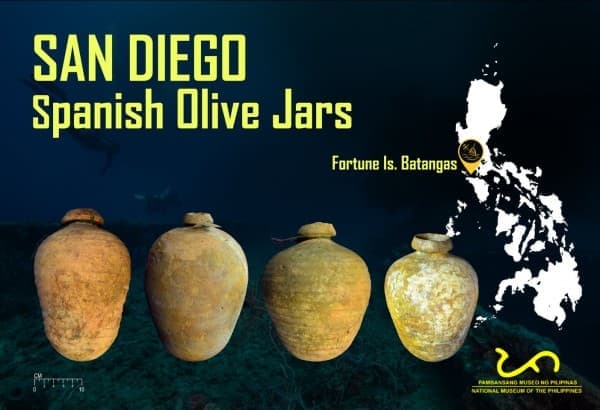